Every good super hero needs a secret identity!  Superman can explain his presence at major events as reporter Clark Kent, Wonder Woman can avoid attention passing as mild mannered Diana Prince, and of course Batman can explain away virtually anything as millionaire playboy Bruce Wayne.  The function of a secret identity is not only to give a hero anonymity, it gives a hero a form of raison d’etre, or reason for being, and it provides us the reader with insight into the authors intentions for a character.

In the Golden Age of comics, DC introduced Hawkman, one of their longest running, albeit lesser known, characters.  Hawkman, not surprisingly, dressed up like a Hawk to fight crime!  But, it is his secret identity that brings us here today.

When not fighting crime, Hawkman was known as Carter Hall, archaeologist and antiquarian collector!  On a simple level, we see here another association between archaeologists and adventure, thus we can look at Hawkman as a root influence on the Archaeologist as Adventurer trope.  There is, however, much more going on!

The name Carter Hall was chosen by his creators, Gardner Fox and Dennis Neville, as a barely veiled reference to Howard Carter, the archaeologist who discovered the tomb of Pharaoh Tutankhamun.  The Egyptian connection deepened as the character’s back story was revealed.  As retold in the 1990’s Golden Age Secret Origins series, Carter Hall was reincarnated from the Pharaoh Khufu, best known today for the Great Pyramid of Giza which was built to house his body in death (although ironically a completed version of that monument appears in the Secret Origins story line).

In this storyline, we see how comics have contributed to a mysticization of the past by conflating different religious concepts, adventure, and ancient world settings.  These kinds of conflations are not only common in pop culture, they also echo throughout the spiritualism movement of the early 20th century. 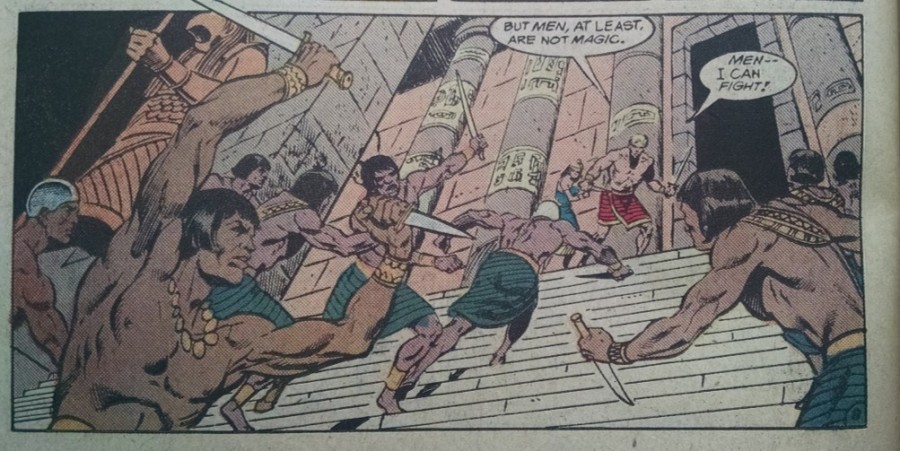 This storyline also makes blatant (although unexplained) statements about race.  Carter Hall as Khufu, is portrayed as a blond haired white man.  While this depiction may have been made in part to draw continuity between the contemporary Cater Hall and the ancient Khufu, it was also explicitly commented on in the comic’s dialogue.  An Egyptian priest mentions Hall’s blonde hair, and after waking up from a “dream,” Hall himself notes that it was strange for him to be a white man in ancient Egypt.

These comments on race exist within a contemporary dialogue of archaeology and pseudoarchaeology discussing the nature of racial traits (or phenotypic traits) among ancient peoples around the world.  The ancient Egyptians, as a literate society, tell us quite clearly that they were the Red people, and that White people lived to the north and Black people lived to the south.  Nevertheless, we have seen many people in the modern world attempt to lay claims to ancient Egyptian racial identity in modern terms.  (For more see my chapter in Lost City Found Pyramid.)

The Western world writ large has long attempted to assimilate ancient Egypt into their own history.  There are, of course, very real connections between Egypt, Rome, and Greece, but culturally speaking Egypt is notably distinct from these other groups.  Occasionally, this assimilation has risen to the level of appropriation and worse as contemporary white supremacist groups have attempted to suggest that ancient Egypt was ruled by Whites.  A counter narrative has likewise arisen from the Afrocentrist movement, which attempts to reclaim Egypt as an African culture.  While the Afrocentrist critique of Egypt as appropriated by the West is very well founded, regrettably some voices in this movement took a further step to suggest that ancient Egypt was ruled by dark skinned sub-Saharan Africans.

While Fox and Neville likely did not wish to ignite racial controversy with their character, the fact remains that they made their hero white in a place where white men did not exist!  Hawkman may do a great deal of good in the contemporary world, but as a blonde-haired Khufu he raises more than a few questions.

Ultimately, Cater Hall’s role as an archaeologist represents one of the most prominent pop culture depictions of archaeology in the 1940s and 50s.  From the “research” I have been able to do, it appears that archaeology was typically a mild background in the Hawkman comics, yet that mild background lays a foundation for how the public perceives archaeology.

Archaeologist and anthropological commentator! I received my Ph.D. in Anthropology from Tulane University, and have worked on archaeological projects in Mexico and the United States. I particularly specialize in the cultures of Mesoamerica and in the study of pseudoarchaeological claims. View all posts by David S. Anderson